**Mr. Laster was instrumental in securing the Horace Greeley House for the New Castle Historical Society.** 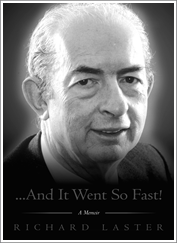 …And It Went So Fast!

This fascinating life story—which starts when Richard Laster, age 14, fled his home in Vienna to escape Hitler’s invasion of Austria—is full of memorable twists and turns on his route to America and eventually becoming “the most memorable man” at General Foods. All this is reflected during a span bounded by the outbreak of World War II in Europe followed by Pearl Harbor, V-Day, the growth of suburbia, Silicon Valley and the numerous sociological changes in America. And It Went So Fast is also loaded with well-tested nuggets of business advice, including the evergreen value of goal-setting. Introductions by Senior Rabbi Jonathan Jaffe of Temple Beth El and Clinton Smith, President, New Castle Historical Society and former Chappaqua Town Supervisor Free admission. Coffee and refreshments served. Book signing by the author. All monies collected will go to benefit the Holocaust and Human Rights Education Center.